Asha has been a spiritual seeker since her early youth. While studying at Stanford University in 1969, she heard Swami Kriyananda speak for the first time. “I knew the moment he walked into the room that he possessed the consciousness I had long been seeking.”

She soon became a founding member of the new community Swami was starting near Nevada City, California, called Ananda Village, based on Yogananda’s dream of world brotherhood colonies for “simple living and high thinking.” Swami Kriyananda placed Asha in the role of teaching and counseling soon after her arrival. She also served as Swami’s correspondence secretary and personal assistant for many years.

She has served as one of the spiritual directors of Ananda Palo Alto since 1987, guiding the development of Ananda’s work in the San Francisco Bay Area, including helping to launch Living Wisdom Schools and Ananda Farm, and supporting a large staff and volunteer team involved in East West Bookshop, Ananda Community, Ananda centers and meditation groups in the Bay Area, Ananda music, and a vital, lively theater arts program. Asha’s most recent book is Swami Kriyananda: Lightbearer, published in 2019. She is also author of Ask Asha: Heartfelt Answers to Everyday Dilemmas on the Spiritual Path; Loved and Protected: Stories of Miracles and Answered Prayers; and Swami Kriyananda As We Have Known Him, a collection of more than 200 stories by people who have been touched by his teachings and spiritual friendship.

Dhuti Johnson received a very musical upbringing with piano and guitar lessons starting at a young age: four years of classical voice training, singing in children’s, church and school choirs, ensembles, madrigal groups, barber shop quartets, rock & roll bands, and folk groups, as well as leading singing activities at a summer camp. After moving to Ananda Village in 1979, she sang in the Ghandharvas small group, directed the choirs in Palo Alto, Ananda Village and throughout India. In more recent years, she has accompanied Ananda teachers on tour in India, Israel, Romania, New Zealand, Australia, Czech Republic, Serbia, Spain, Italy and different cities in the United States. With the advent of COVID, Dhuti has been offering online sing-alongs three times a week, as well as lessons and classes.

“Sharing Ananda Music around the world: It is the same wherever I go. It doesn’t matter if people understand the words, which are sung in English or Italian. The music is imbued with a consciousness that transcends language. The language they understand is one of joy, inspiration and love, and they feel it in their souls. Watching the faces in the audience as I share the songs of Ananda, seeing a joyful light awakened in their eyes, and a growing love in their opened hearts—this is one of the greatest pleasures of my life.” “Ananda Music really transforms you from the inside out. When you get out of the way and the music is just flowing through you, it transforms you in a way unlike anything else, I venture to say, except for Kriya.” “What I see is that people don’t think they can sing or are musical. Then they start to chant, then they start to sing and they’re off on the most beautiful journey of their life, being able to express the divine through this music.” 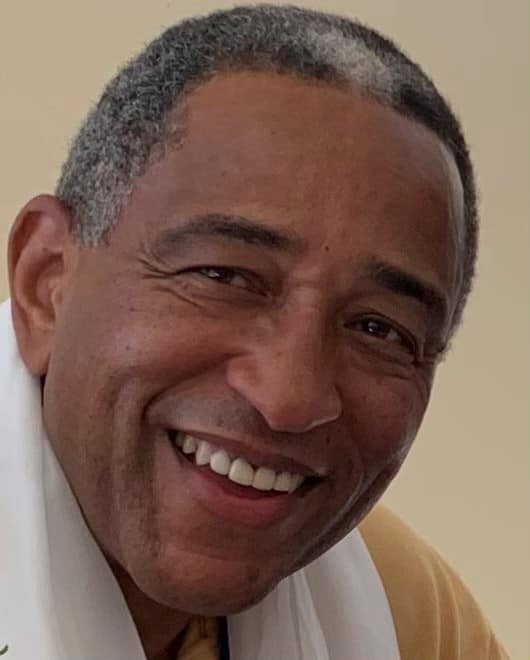 Tyagi Ram (Robert Smith) has been a devotee of Paramhansa Yogananda and Swami Kriyananda for 44 years since he moved to Ananda Village in August 1977 at the age of 24. He is a great singer and guitarist and loves to share Swamiji’s and Master’s music with all who would listen. A graduate of Ananda Yoga and Meditation Teacher Training, Ram has served in various Ananda Centers worldwide, including Ananda Village, Atherton, San Francisco, Assisi, Rhode Island, and Los Angeles. He has been an ordained Ananda Sangha Lightbearer Minister since 1982 and served as the Spiritual Director of Ananda Assisi from 1987-1991.

Find Ananda Near You

Retreats in the U.S., Italy, and India

Our Spiritual Directors
More from Ananda

Find Ananda Near You

Treasures Along the Path

The Education for Life Philosophy